Riding through a city by bike is usually one of the faster methods to get from A to B. However, not every city has the infrastructure in place to support bicycle traffic on busy streets. Fortunately, many cities are investing in improving their roads to cater to cyclists — and although it’s not perfect anywhere, there are a number of cities specially designed to be bicycle-friendly. Here are the top five cities in a row.

The Danish capital outcompetes Amsterdam as the leader on the list. The reason why seems clear: since 2007 around €134m has been invested in bicycle infrastructure and facilities, and the results are obvious. Since 2015, eight bicycle bridges have been opened — yes, bridges especially for cyclists. Also, the accessibility to important parts of the city has improved and there have been experiments with various so-called green wave traffic light systems for cyclists. That, coupled with so-called bicycle superhighways, has ensured that 62% of inbound traffic is now by bicycle; just for comparison, cars make up a meagre 9%. Sounds good, right?

Whereas Dutch cities mainly focus on preserving cycling infrastructure, Utrecht is investing in it. Because of that, it deserves a second place in this ranking. Utrecht has the most kilometres of bicycle-priority roads in The Netherlands. Further plans to accommodate an additional 33,000 bicycles near the main station in 2020 play a big part in the ranking — this is in addition to the current 12,000 parking spots.

Of course, Amsterdam is in the top-three most bicycle-friendly cities of the world. Where the Dutch capital was the leading city in previous editions of bicycle research, the innovative plans from the municipalities of Copenhagen and Utrecht have led to its decline in the rankings. Although Amsterdam is known for its bicycle traffic, plans to improve the infrastructure are not yet concrete enough for first place. Researchers are also worried about the large number of scooters that accompany cyclists on the bicycle paths.

Strasbourg has been the leading bicycle city in France for many years. The number of cyclists in the city centre is considerable, and with the arrival of Velhop (comparable with the Dutch public transport bicycle, the OV-fiets) this has only increased. Plans for so-called bicycle highways connecting both the inner city and surrounding cities are a welcome addition to guide all bicycle traffic safely and quickly through the city. This is especially great given the subsidy for cargo bicycles, which now play a major role in the transport of cargo within the city.

The arrival of the Cykelhuset — the ‘bicycle house’, an apartment building designed for bicycle-users — indicates that this city is taking steps in the right direction. In addition to encouraging people to lead a car-free lifestyle, investments are also being made into bicycle infrastructure. A bicycle ferry and a pilot scheme with packages and freight being delivered by (cargo) bicycles are great signs of this. 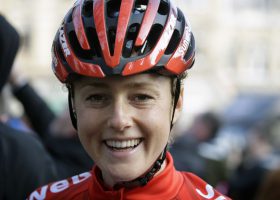